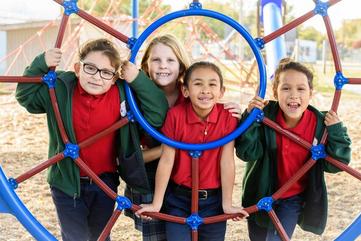 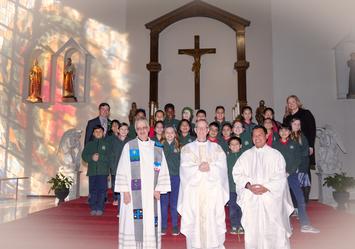 In 1951 three Dominican sisters of Sinsinawa, Wisconsin visited an energetic priest who had just overseen the construction of a new parish in Tulsa, OK. These three were to become the first teachers at Sts. Peter and Paul Catholic School. Although construction of the new school was not completed by September of 1951, registration for classes began nevertheless – and lasted three days. The school opened its doors for the first time, September 10, 1951 with an enrollment of 250 students. In just a few years, enrollment would soar to a record 648. During this time, many classes were held in the church, while the few classrooms, which had been built, were filled to capacity

School and parish grew together. “Temporary” buildings were constructed to serve as classrooms (what is now the administration building), additional desks were ordered, and members of the parish built equipment for the school playground. Ten years after the parish’s opening, a new, beautifully simple church was constructed on the campus. This new building meant that the old one would be converted into a gymnasium. The school kept growing, and the cost to families  never rose out of reach: in 1956, the registration fee was a mere $1.00 with tuition a modest $6.00 per month ($5.00 for Kindergarten).

Sts. Peter and Paul was the first school in the diocese to include computer literacy as a mandatory part of the curriculum and was one of the first to establish an educational endowment. Strong leadership from pastors, principals and board members has allowed the school to develop innovative programs and to change with the times.

Sadly, in 1988 the Dominican sisters left the school, though their influence still thrives. The convent was re-modeled into a meeting room and named after a former principal, Sister Jamesetta. While today there are fewer young parish families with children to send to the school, exciting developments are always underway: a computer lab, updated library, new dining room and  hardwood gym floor are only a few recent improvements. New sidewalk awnings, playgrounds, modern classroom flooring and a high-elements challenge course have also been added, and complement the school’s ongoing academic progress. It was the vision of Saints Peter and Paul’s founders to build a thriving church and school on empty prairie. That faith-filled sense of adventure is still present, and enables both institutions to meet the challenges of an increasingly diverse parish and classroom community.